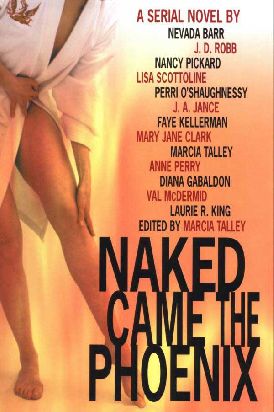 An all-star lineup of 13 women mystery authors has produced one madcap, murderous tale in the same serial fashion as Naked Came the Manatee (1996). To some extent, position determines each contributor's role, but each author has ample opportunity to display her unique talents. Nevada Barr, who leads off, deserves credit for introducing heroine Caroline Blessing; her surprising mother, Hilda Finch; and several more of the zany inhabitants of Phoenix Spa, snuggled in the Blue Ridge Mountains of Virginia. J.D. Robb, in the number two spot, wastes no time shifting the plot into gear with the murder of the spa's flamboyant owner, Claudia de Vries. Those who follow (Nancy Pickard, Lisa Scottoline, Perri O'Shaughnessy, J.A. Jance, Faye Kellerman, Mary Jane Clark, Marcia Talley, Anne Perry, Diana Gabaldon and Val McDermid) each get a crack at muddying the waters or putting a new spin on an already dizzy character or in some cases, adding a new victim to the growing pile. Lucky 13 Laurie King dazzles by weaving a prettily finished quilt from the motley patches created by her comrades. Readers will relish the resulting comic soap-opera murder mystery, taking especial pleasure in watching these pros deftly recast a scene, a clue or a character to keep the story rollicking along. (Aug. 13)Forecast: Together these women command a huge fan base, and if enough of them are willing to promote, this collaborative effort could rack up strong sales.

The promise of discretion and pampering-and a long-overdue reconciliation with her mother-draws Caroline Blessing, the young wife of a newly-elected Congressman, to the fancy Phoenix Spa. But after her first night in the beautiful Blue Ridge Mountains, Caroline wakes to find the rich and famous guests in turmoil and under suspicion: the spa's flamboyant and ambitious owner has been murdered. As the secrets come out-and the body count rises, can Caroline keep herself from becoming the next victim? 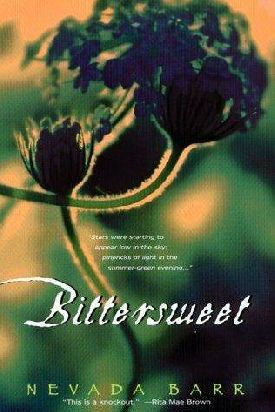 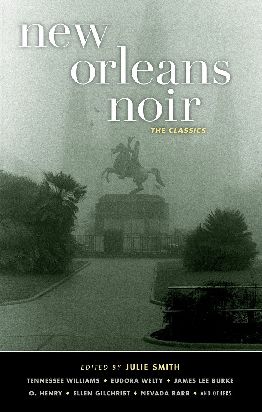 This sequel to the original best-selling takes a literary tour through some of the darkest writing in New Orleans history. 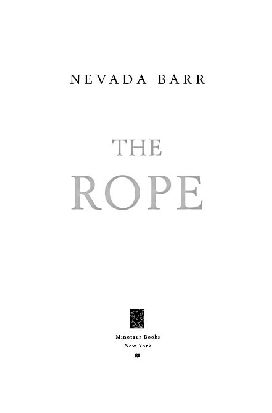 Anna Pigeon’s first case—this is the story her fans have been clamoring for… this is where it all starts.

In , the latest in Nevada Barr’s bestselling novels featuring Anna Pigeon, Nevada Barr gathers together the many strings of Anna’s past and finally reveals the story that her many fans have been long asking for. In 1995 and 35 years old, fresh off the bus from New York City and nursing a broken heart, Anna Pigeon takes a decidedly unglamorous job as a seasonal employee of the Glen Canyon National Recreational Area. On her day off, Anna goes hiking into the park never to return. Her co-workers think she’s simply moved on—her cabin is cleaned out and her things gone. But Anna herself wakes up, trapped at the bottom of a dry natural well, naked, without supplies and no clear memory of how she found herself in this situation.

As she slowly pieces together her memory, it soon becomes clear that someone has trapped her there, in an inescapable prison, and no one knows that she is even missing. Plunged into a landscape and a plot she is unfit and untrained to handle, Anna Pigeon must muster the courage, determination and will to live that she didn’t even know she still possessed to survive, outwit and triumph.

For those legions of readers who have been entranced over the years by Park Ranger Anna Pigeon’s strength and determination and those who are new to Nevada Barr’s captivating, compelling novels, this is where it all starts. 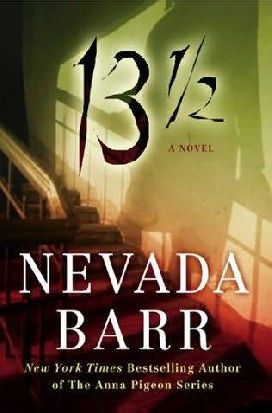 In 1971, the state of Minnesota was rocked by the 'Butcher Boy' incident, as coverage of a family brutally murdered by one of their own swept across newspapers and television screens nationwide.

Now, in present-day New Orleans, Polly Deschamps finds herself at yet another lonely crossroads in her life. No stranger to tragedy, Polly was a runaway at the age of fifteen, escaping a nightmarish Mississippi childhood.

Lonely, that is, until she encounters architect Marshall Marchand. Polly is immediately smitten. She finds him attractive, charming, and intelligent. Marshall, a lifelong bachelor, spends most of his time with his brother Danny. When Polly's two young daughters from her previous marriage are likewise taken with Marshall, she marries him. However, as Polly begins to settle into her new life, she becomes uneasy about her husband's increasing dark moods, fearing that Danny may be influencing Marshall in ways she cannot understand.

But what of the ominous prediction by a New Orleans tarot card reader, who proclaims that Polly will murder her husband? What, if any, is the Marchands' connection to the infamous 'Butcher Boy' multiple homicide? And could Marshall and his eccentric brother be keeping a dark secret from Polly, one that will shatter the happiness she has forever prayed for? 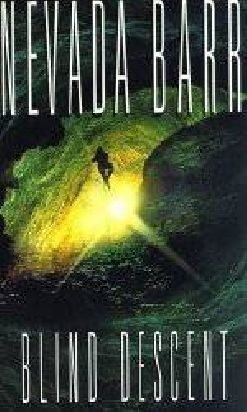 Forced to cope with her claustrophobia and to use all the skills she has developed above ground, park ranger Anna Pigeon enters the dangerous Lechuguilla Cavern in New Mexico's Carlsbad Cavern National Park to attempt a rescue and learns who she can trust and who can be saved. 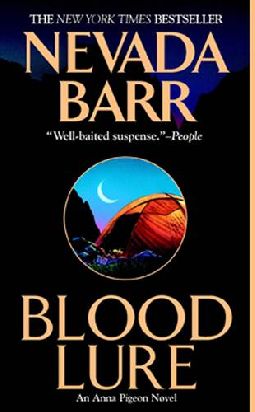 During a grizzly bear research project in Glacier Park, one terrifying night, a bear finds the research team. By morning, the camp is in ruins and a few hours later, the body of a camper is discovered. Anna's search for what, or who, is responsible stretches her resources to the limits. 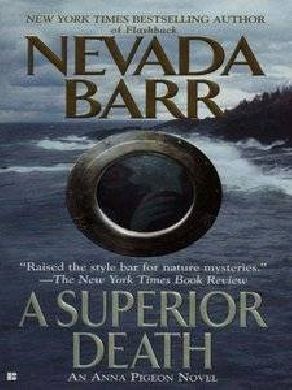 Park ranger Anna Pigeon returns, in a mystery that unfolds in and around Lake Superior, in whose chilling depths sunken treasure comes with a deadly price. In her latest mystery, Nevada Barr sends Ranger Pigeon to a new post amid the cold, deserted, and isolated beauty of Isle Royale National Park, a remote island off the coast of Michigan known for fantastic deep-water dives of wrecked sailing vessels. Leaving behind memories of the Texas high desert and the environmental scam she helped uncover, Anna is adjusting to the cool damp of Lake Superior and the spirits and lore of the northern Midwest. But when a routine application for a diving permit reveals a grisly underwater murder, Anna finds herself 260 feet below the forbidding surface of the lake, searching for the connection between a drowned man and an age-old cargo ship. Written with a naturalist's feel for the wilderness and a keen understanding of characters who thrive in extreme conditions, A Superior Death is a passionate, atmospheric page-turner. 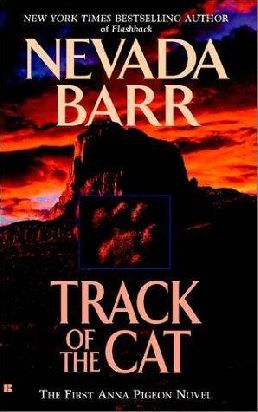 Track Of The Cat

Track Of The Cat

Fleeing New York to find refuge as a ranger in the remote backcountry of West Texas, Anna Pigeon stumbles into a web of violence and murder when fellow park ranger Sheila Drury is mysteriously killed and another ranger vanishes. 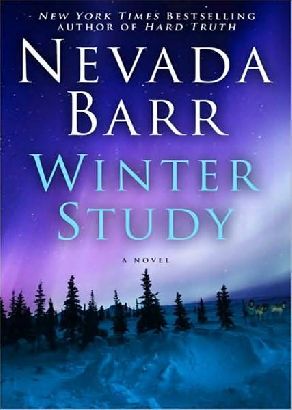 In bestseller Barr’s chilling 14th mystery thriller to feature National Park Service ranger Anna Pigeon (after 2005’s Hard Truth), Anna joins the team of Winter Study, a research project intended to study the wolves and moose of Michigan’s Isle Royale National Park, the setting for 1994’s A Superior Death. Complicating the study is Bob Menechinn, an untrustworthy Homeland Security officer assigned to shadow the research. Crowded into inhospitable lodgings and persecuted by unrelenting cold, Anna is far from her comfort zone as nature turns awry with a series of bizarre events. The team stumbles upon the tracks – and the mutilated victim – of a preternaturally large, unidentified beast, and local packs of wolves descend on human-populated areas, a behavior out of step with their species. The campfire legends of youth metastasize into adult fears as Anna must piece together a connection between these anomalies while guarding herself from the strangers around her. Barr’s visceral descriptions of the winter cold nicely complement the paranoia that follows the appearance of the mythic monsters at play.